Posted on February 27, 2011 by Centre for Medical Humanities

For me, this idea of a space between ‘anxiety and boredom’ is deeply interesting and to round off my seminar, I wanted to take this a step further and propose, that instead of striving for this elusive and subjective happiness, we re-visit just what it is that the arts offer us. Do we think that art and creativity are just like other forms of medication, something to sedate and pacify us? Is our art/health agenda just about making us smile and proving our worth in relation to raised levels of serotonin?

The work around creativity testing affirms that our questioning minds are a positive thing; that uncertainty and diversity is something we should thrive on, and yet in the arts/health field, we’re still encouraged to reduce our practice down to its measurable constituent parts, for efficacy’s sake.

Whilst I’m not suggesting that anti-depressants aren’t an effective tool in the management of clinical depression, I am suggesting that across broader society, we are in danger of medication taking away complex and difficult thoughts; and this in turn, has perhaps reduced us into easily manageable efficient and productive beings.

Plotting this path from cold-war strategizing and game theory to the medicalisation of distress and boom in the happiness industry, has left me with a very clear impression, that attempts to control our mental health is highly political and highly profitable, and there is vociferous debate as to the very nature of depression.

At the start of my presentation, I made reference to a piece of work that was deemed unacceptable on a mental health unit as a vehicle for conversation, because it might provoke too much emotion and to conclude, I shared one last object, presented by the artist Jeremy Deller to London’s Imperial War Museum. This was a car that had been caught up in a car-bomb explosion in Baghdad’s, Al-Mutanabbi Street book market, on the 5th March 2007. What was left was a rusted and mangled wreck; a memorial to the 38 people who died in this explosion. 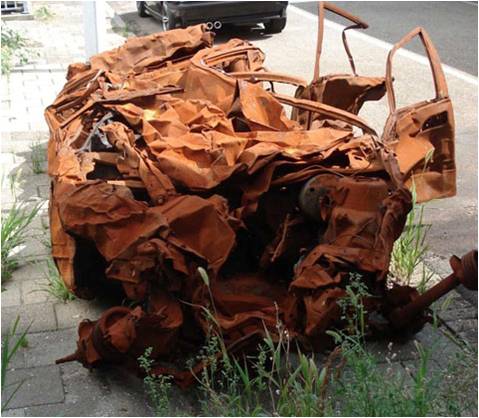 Is this a piece of art? – I don’t think it is, but has the artist forced us to confront something terrible and uncomfortable beyond our day-to-day experience of life; yes he has. By taking this car around America and sharing it with people even more geographically removed, the artist has engaged in a complex and difficult debate.

Would I share this bombed out car with people affected by mental health issues? -with considered sensitivity, you bet I would.

Pascal Bruckner in Perpetual Euphoria, comments on the sometime threatening role of the arts; ‘Just as a work of art reveals new aspects of life to us and thus helps embellish it, there are Sirens around us, solar, radiant beings who invite us to try other destinies. They are the ones who experiment with new arts of living, wrenching happiness away from its canonical definitions, and set it upon new avenues…Nothing could be sadder than to stubbornly miss out on one’s own time, on what is best in its madness, its inventions.’

We are in the midst of global depression caused by miss-management and greed, and this outmoded game theory, based on some deeply held and distorted views of humanity; ludicrous as it seems, has been central to the recent NHS target culture and still influences much political thinking.

We can succumb to this prescribed notion of selfish individualism; maybe become a passive, flattened out citizen. Or we can look at ourselves as free thinkers as part of a 21st Century Enlightenment, and explore what it means to be human as part of this ever-changing and challenging world.

Art is political, our mental health and well-being our political too. We are constantly peddled stories of what we should aspire to be and how we should live our lives, and in the UK, whilst we are governed by a cabinet of millionaires we sit back and take the blame. I’d like quote Greenberg again;

“Regardless of whether or not the drugs work, to call pessimism the symptom of an illness and then turn our discontents over to the medical industry is to surrender perhaps the most important portion of our autonomy: the ability to look around and say, ‘This is outrageous. Something must be done.”

Art gives us voice and helps makes meaning of this world, and I would suggest, that a healthy degree of pessimism may just be the response we need.