Posted on September 19, 2013 by Centre for Medical Humanities

Jenny Laws, post-doctoral research fellow at the Centre for Medical Humanities and Department of Geography, Durham University, reviews Paul Moloney, The Therapy Industry: The Irresistible Rise Of The Talking Cure, And Why It Doesn’t Work (London: Pluto Press, 2013). You can download a sample of the book here. Many thanks to Pluto Press for permission to make this extract available.

When my colleague here at the Centre advertised a review copy of Paul Moloney’s debut, The Therapy Industry (Pluto Press, 2013), I was happy to volunteer.  For nearly a decade I have been working at the periphery 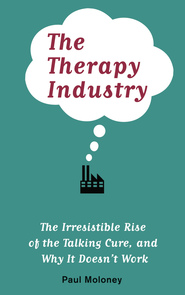 of what might come next in the field of critical therapeutics.   Moreover, caught by Moloney’s subtitle (‘the irresistible rise of the talking cure, and why it doesn’t work’), in recent years I have become fascinated by the metaphor of ‘what works’ as applied to matters of the human psyche and recovery from ‘breakdown’.  The neat and sweet cover illustration – a stylised silhouette of the archetypal factory merrily chugging speech-bubble plumes from its chimneys – suggested that this newcomer to the bookshelves was right up my street.

Perhaps at odds with the title, the focus of this primarily accessible text is not just the ‘industry’ of psychotherapy, but rather a broader landscape of mental healthcare and therapeutics that encompasses medical psychiatry, the various flavours of talking intervention, the psycho-pharmaceutical industry, and to a lesser but interesting extent, the academic research and publishing industries also.  In the opening chapters, Moloney initiates the reader in some of the most prominent arguments with which to challenge the so-called ‘psy’ professions, with sub-sections ranging from the (now well-rehearsed) critiques of overly organic explanations for psychopathology, to the troublesome ‘medicalisation’ of everyday life and the philosophical challenges of talking oneself better.  Most pervasively, the unequivocally problematic character of the evidence base for currently fashionable interventions such as cognitive behavioural therapy is brought into focus.  For UK readers especially, the extended case study of IAPT (Increasing Access to Psychological Therapies) – along with light-touch editing to speak to recent governmental austerity measures – is particularly helpful.

In the second half of the book, Moloney settles into a more elongated discussion for a ‘neo-materialist’ basis for mental distress – of the political claim (to quote from the text) that ‘it is the world outside that determines mental health, not the inner world that can be changed by talking about it’.  The overriding push here is to return to contemporary discussion the older motivations of those such as Eric Fromm, R.D, Laing, David Smail and Lucy Johnstone among others in revealing a political economy of unhappiness, and the ways in which such economy might be further fuelled by individualised solutions such as psychotherapy – primarily a concise introduction to ‘anti’-psychiatry, pitched particularly at newcomers.  We are given a commentary rather than a novel debate at this point, yet Moloney’s two-pronged attack keeps things fresh – on the one hand synthesising a range of literatures to evidence the links between mental distress and material circumstance, and on the other providing a range of contemporary examples from penal rehabilitation and self-esteem classes for schoolchildren to reveal the sheer slipperiness of therapy culture.

The appeals of The Therapy Industry are numerous.  One is Moloney’s ability to select skilfully from a vast literature the very best of the research evidence, the most thought-provoking of the philosophical arguments and the most curious of the various paradoxes that emerge at the interface of psychotherapeutic policy and practice.  As such the text is full of gems and titbits to reengage the imagination, inspire further thinking, and introduce me to – or remind me of – texts new and old that deserve reading or re-reading respectively (for those who, like me, have been compiling teaching materials for the academic year ahead, the book is a godsend).

Moloney builds a convincing case for simply how dull mainstream psychotherapeutic practice has become in comparison to the work promoted by its more radical and philosophically innovative forefathers; a trend which Moloney clearly finds as intellectually disappointing as he does concerning politically.  Again, this observation is not new: a friend of mine and fellow psychiatric survivor has described for some decades what Moloney discusses as ‘vanilla psychiatry’ – a play on the queer theory term ‘vanilla’ sex to signify conventional or dreary sexual activity.  However, the success of The Therapy Industry is to go further to articulate how such a ‘vanilla’ position not only misses the opportunities of a more politically engaged psychotherapy, but how, more worryingly, such standpoint holds current therapeutic doctrine beyond critique through its play-it-safe assertions, maintaining and protecting the industry standard through very virtue of a philosophy that is too bland to inspire discussion or initiate critique.  As such, to quote again from Moloney, ‘it is with what might be seen as stupefying obviousness’ that a rationale has emerged within almost every mental health system in the developed world to profess a banal mix of bio- and socio- explanations (although rarely do such modes of explanation transgress to the bio- or socio- political).  As Moloney goes on to argue, the problems with such models are not only that in focusing on everything, nothing is in focus, but also that through purposefully excluding some of the more radical visions of post- and anti-psychiatry, the potentials for a politically informed and politically engaged talking therapy are woefully diminished.

There are, of course, matters I would be intrigued to discuss further with Moloney.  One such is Moloney’s position with regard to the role of ‘science’ (and relatedly, philosophy), which begins with the fairly popularist stance of science-will-save-the-day (indeed, in responding to the many claims of contemporary talking therapies, the opening page begins that ‘all might be well if [such interventions] were better grounded in science than their forefathers fifty years ago’) – yet which simultaneously seems to find its frustration with contemporary mainstream talking therapies the scientism of the soul that seems in so many ways to erode the richer and more interesting nuances of the human psyche offered for instance by politics and philosophy.  Indeed, is not one of the primary contributions of Fromm and Laing – Freud, even – to whom Moloney eventually turns, revealing this more mysterious and sensitive side to human experience?

Elsewhere, I have a yearning to go deeper.  The instincts which first drew me to The Therapy Industry – the fascination of the ‘what works’ metaphor for instance – have not been fully satisfied.  Despite The Therapy Industry’s impressive account of how shortcomings in psychological assessment methodologies mean that ‘best evidence’ is perhaps not as evidence based as it claims, less attention is paid to what it means to say therapy X has or hasn’t worked (that is, other than the crudest measurements of symptom reduction, what is that thing to which we are alluding when we speak of ‘recovery’?).  Similarly, to think again to that cover illustration – the factory chimneys of a talking industry mass producing souls and subjectivities – I wonder whether Moloney’s final work of returning and revisiting is necessarily the most satisfactory endpoint for the book.  For sure, the return to an older and more critical engagement with therapeutic practice is welcome, and the introduction to anti-psychiatry will undoubtedly be useful to readers unfamiliar with the field – but a more interesting extension to this question might be, what then of a landscape in which the factory is no longer the focal point of working society (and in which the psychological ‘factories’ at the heart of anti-psychiatric debate are no longer relevant features of mass produced psychiatric care)?   To have made some preliminary remarks upon what work might be required for updating the philosophies of classic anti-psychiatry for a profoundly post-industrial and post-asylum age might have indeed accelerated this release to another level intellectually.

In conclusion then, it would be dishonest to suggest that this book – for those of us who have been working as academics in this area already, at least – is ground-breaking in any substantive sense.  There is less in this review of the haggard enlightenment that can be detected in someone who has read something truly difficult (Jonathan Gadsby’s review on this website earlier this year of the enigmatic Madness Contested is a good example).  Yet nor should the achievements of this book be taken lightly:  Moloney’s erudite articulation and easy bringing together of this multi-textured and complex intellectual and political field amidst yet more shake-ups of mental health care is never more timely; moreover, if demonstrating the need for a more outward looking, materially oriented social psychotherapy is a crusade, then Moloney’s strength is his steadfast ability to persuade.

As a piece of end-of-summer reading, my experience of The Therapy Industry also brings into question what it is to read and the value of re-reading and re-hearing what we know (or what we think we know) and of the need to remind ourselves of why what we’re working at is important.  Without hesitation, I will recommend The Therapy Industry to students, practitioners, and interested folk who are simply new to the area.  Moreover, Moloney’s The Therapy Industry will also join my select collection of texts that I will trust to those who have yet to be convinced to think critically upon the primacy of psy.  To end with the lines with which Moloney closes The Therapy Industry: ‘A concerted effort to take the plight of the poor and the marginalised seriously, to redistribute wealth, and to give them more say over their own future might not solve every one of the [psychological miseries which comprise most of our over-stretched health service’s therapeutic budget], but it would be a good place to start’.

Jenny Laws is a post-doctoral research fellow at the Centre for Medical Humanities and Department of Geography, Durham University.  She is currently finalising a monograph, ‘Working Through’, which considers the empirical and philosophical manifestations of ‘what works’ in the lives of people with long term mental unwellness.